Gerard ter Borch, 1617-1681.
Ter Borch developed his own distinctive type of interior genre, in which he shows us, with grace, the atmosphere of well-to-do, middle-class life in 17th-century Holland. 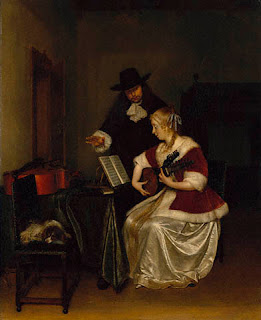 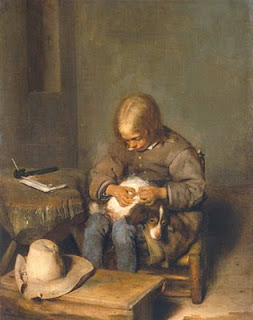 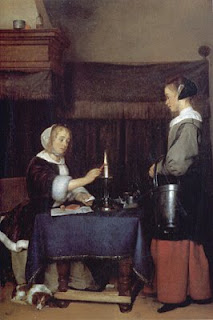 Woman sealing her letter with her Maid.
Woman playing her Theorbo to two Men, ca 1667-1668


Note:
Toward the end of the 19th century, breed fanciers bred a version of the spaniel whose ears stood up. This dog was said to have been nicknamed papillon based on the impressively large, erect ears that resembled the wings of a butterfly. The drop-eared variety of the breed came to be called the Phalène(which means "night moth"). Both types are still bred today and appear in the same litter. The Papillon variety is much more common, although recently the Phalène has undergone a resurgence in popularity.
(Wikipedia)