This is a heart-warming story, and also a story we can all learn from.
It was sent to me by a Family, which owns one of our Paps.
Several recommendations are literally falling in "one pot" here.
Well worth your time to read.


Hi Antje and Ernie and Papillon pack! I hope this finds you happy and well. Unfortunately, Zen and I can't make the social this year. I'm in school for my nurse practitioner and with my class schedule I can't do any traveling right now. I'm going to miss seeing you all this year. I hope to have a more open schedule this time next year.


Zen is doing wonderful. He is the ruler at home and nothing happens without him knowing about it and approving it. He remains my main running partner, although since it is hot I only let him go for two miles. And he is still the ball chasing king at the dog park. His sister Kenya passed away in April, she was 14 years old. Pippin (my Mom's pomeranian we adopted when she passed) is still his main squeeze. And Zen's main playmate/nemesis is Mouse.

I don't think we had Mouse yet when Zen and I visited last year.  Zen's vet asked us to foster a papillon pup that was turned over to them since he was not eating and failing to thrive. He was over six months old and they had him for three weeks giving him IV nutrition just to get him up to two pounds. We named him Mouse, after a character in a book we all like. Unfortunately, after we got him happy and healthy and were starting to look for a home for him (our neighbor was seriously considering adopting him), he ate a small button and string from a pair of PJ's that fell behind the bed. Unfortunately, due to complications of the many surgeries he now has megaesophagus. He recently had his feeding tube removed and is again healthy and happy. Because of the extra daily medical care he needs he will be staying with us (although my neighbor is still his next favorite person).

I tell his story as a warning. It wasn't the button that did the damage-it was the string attached to the button that caused permanent bowel damage. The button was small enough it would have probably passed without us even knowing he ate it. Also, It wasn't the surgeries or bowel damage that gave him megaesophagus, it was the excessive nausea and vomiting that damaged the musculature of his esophagus. Although his case of megaesophagus is mild, he can no longer eat any hard solid food without triggering an episode of regurgitation which hurts him (he cries) and puts him in immediate danger of pneumonia. Thankfully because he still has some muscle tone he can drink regular water without worrying about him regurgitating it. Finally, once a dog has a history of ingesting a foreign object he no longer qualifies for pet health insurance.

The good part of this story is because of Mouse's dietary needs, we now make all of our own dog food. Not only do the dogs all LOVE it, Zen lost the extra weight he was carrying, and his fur is much softer and less prone to tangling than it was when we fed him kibble. The last vet checkup showed all three dogs in super good health with beautiful skin and their teeth have improved--no irritated gums and the yellowing on their teeth have decreased. The monthly cost works out to be the same as the higher end brands at the pet-store, except we look for sales on the meat so ultimately the cost has been less. It only takes 30-45 minutes to cook a months worth of food (we freeze the extra) and we just do that while we cook other stuff so it doesn't take any additional time. I've added diatomaceous earth to the dogs skin and that works wonders! The fleas in this area are out of control but the diatomaceous earth on their skin every 1-2 weeks controls them perfectly. Thanks for the tip!

All-in-all it has been a crazy busy year, but everyone here is doing well,
Arin 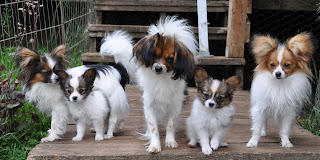 Following comes her chef's menu for the dogs. Just in case you want to know what miracle ingredients are served:

I make sure the food is at least 80% meat based. Primarily, I use ground beef with ground turkey. I drain off most, but not all, the fat. I try to add organ meats but not too many since it makes it very rich on their stomachs. If I haven't cooked a whole chicken for the house, I just pick up some from the store or butcher (very cheap). I use ground meat for the cost and because I have to ground it to a paste for mouse but the other dogs actually prefer small bites (I don't like giving them that because then they eat too fast). 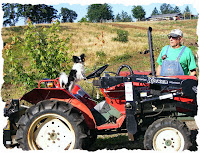 The other 20% is a mix of white rice and oatmeal. I don't add corn or other types of grains. Occasionally I will put a couple of tablespoons of pumpkin in there but not too much since it plugs them up. I also add some vegetables (green beans are their favorite) very small amount of broccoli, carrots, greens, or frozen mixed vegetables on sale. All of this I add to a very large pot of water to boil since the dogs cannot break down plant fiber and I overcook it until it is very soft. I do add a very small amount of garlic but information is mixed on whether this is okay or not (some say yes--it helps with fleas; and some say not safe in any amount). I use a hand held mixer to blend this to a watery paste and add it to the cooked meat.
I also keep a fresh mix of bone broth for cooking with (for people food). I've started adding a tablespoon on top of the dogs meals to make sure they have enough calcium and other minerals. Occasionally I'll add eggs. For a treat they get cheese added on top.
Ultimately I look around my refrigerator and see what is on sale at the store and use those ingredients. I do google what vegetables are safe for dogs just to make sure and double check that I'm not harming them.
For an active papillon, their nutrition requirement is approximately 250-350 calories per day. This works out to 2.2-2.5 oz twice a day. I just keep an eye on their weight and adjust as needed. This is a really small quantity -- just a little bit larger than a golf ball.
Typing this out makes it seem much more complex than the actual process is! It really only takes 30-45 minutes.
I agree with you on the DE dust--it does get quite awful! With only three dogs I can get away with every 1-2 weeks. I've been using a spice shaker, do you have a suggestion on a better delivery system?


Here is another added recommendation from another Road's Paps Owner, I got as a response to the above on my FB page.
Very touching story and great recipe! We make this for ours too but with variation(s). Overcooking veggies rids of good nutrients, we cook it just long enough to break down cell walls then chop into smaller pieces before mixing in. Once cooled and before freezing, we mix in plain yogurt for added calcium... also helps with digestion as it's an excellent source of probiotics!! We are currently mixing this with kibble just before serving but have been considering dropping the kibble altogether. I've been under the assumption that kibble isn't good for their teeth and this story reassured me all the more!! Thank you for sharing!