Here is a letter from our Stenley's new owner . She adopted him recently and lives in Canada.
It shows, that, yes!, it can be done, to adopt an older Papillon; as long one can devote time and love into this kind of adoption.

Hey Antje,
Just wanted to let you know that Stenley is doing really well. His personality is really starting to show now what he is comfortable here. He has so much energy every morning and he races figure eights around the yard while Cosmo chases him. He sleeps most of the day at work but he isn't shy when people want to say hi to him. Stenley has really bonded with my little cousin Noah. They will sit on the floor in the living room while Noah feeds Stenley treats and tries to teach him how to shake paw and roll over. They have the shake a paw figured out but the rollover still needs some work. 😉 He really enjoys Sunday afternoons at the dog park in the river valley. Last week we hiked for about two hours and the dogs still didn't want to load up in the car to go home! I have an appointment booked at the vet in two weeks to get him neutered and to have his teeth cleaned(he likes having his teeth brushed about as much as my other dogs do, which is not at all!). I wanted to let him get settled in here at home before he went through the stress of going to the vet for surgery. I have taken him with me for Freya's(my Rottweiler) check-up appointments for her knee and all the staff just love him. Thanks again for for letting me share my life with Stenley! He is the perfect addition to my furry little family! 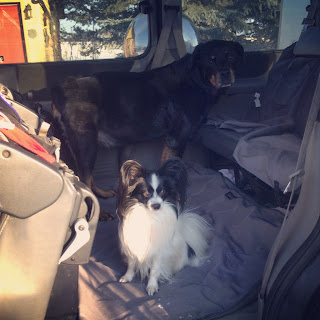 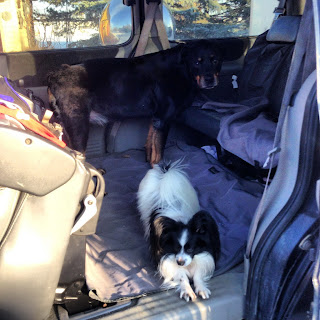 Stenley and Freya, ready for a car ride!
Posted by Road's End Papillons at March 02, 2013
Email ThisBlogThis!Share to TwitterShare to FacebookShare to Pinterest
Labels: Owned by Others